Home » Appliances » Heating, Cooling & Air Quality » How Do Air Conditioners Work? Here’s all you need to know about how the AC works

How Do Air Conditioners Work? Here’s all you need to know about how the AC works 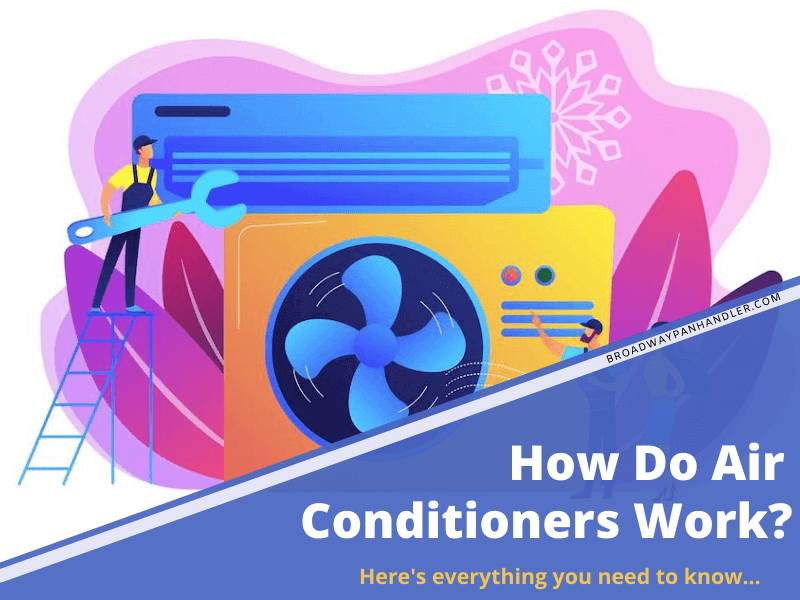 If you live in a state which experiences extreme temperatures, then an air conditioner will be one of your important home gadgets which enhances your life and makes everything seem more comfortable and much more relaxing.

According to a published report by the Energy Information Administration, around 87% of homes across America uses an air conditioning unit, and the figure keeps increasing. From this report, we can see that the reliance on good air conditioning systems by homeowners to keep the maintain balanced home cooling has deeply penetrated modern life.

How Does Air Conditioners Work?

An air conditioner works through a basic concept which is based around a chemical called refrigerant, sometimes known as hydrochlorofluorocarbons or HCFCs. The refrigerant loops from inside your home, to outside your home on a continuous basis, banishing heat outside of your home. The refrigerant then cools as it enters your home and the process begins again.

When water is heated, the liquid evaporates into a water vapor or a gas. It is in this way that the refrigerant chemical works as it absorbs heat during its liquid state and then transforms into gas.

The refrigerant is then quickly turned back into a liquid, and the heat which it had previously absorbed is released outside. This cycle continues on a continuous loop.

Parts of the air conditioning system responsible for cooling your home

There are four parts to the air conditioning system namely:

The evaporator is the part of the air conditioner which is found inside of the home, evaporating the refrigerant chemical. Air moves to the evaporator, the refrigerant located in the coil absorbs the heat from the air, turning the liquid to gas. As this process occurs and heat is taken from the air, the cold liquid turns to a hot vapor. The air is subsequently cooled down.

The compressor compresses the gas to create a higher pressure and a higher temperature, passing this gas to the condenser.

The condenser condenses the gas back into the original liquid state and radiates the heat. The cooled liquid then returns into the home again.

The fourth part of the air conditioning system is the expansion device which then regulates the flow of liquid refrigerant into the evaporator, and the process begins all over again.

An air conditioner additionally reduces the humidity in the air, decreasing levels of water vapor in the air which helps your body feel cooler as sweating is reduced. This dehumidifying action enables the air to be drier as well as cooler, enhancing levels of comfort within your home.

It is interesting to note that humidity control was actually the primary aim of the very first air conditioners, invented by Wills Carrier in Brooklyn, N.Y. in 1902. Temperature control was an additional benefit at the time for the air conditioner, which has ironically become the main selling point for modern air conditioning systems.