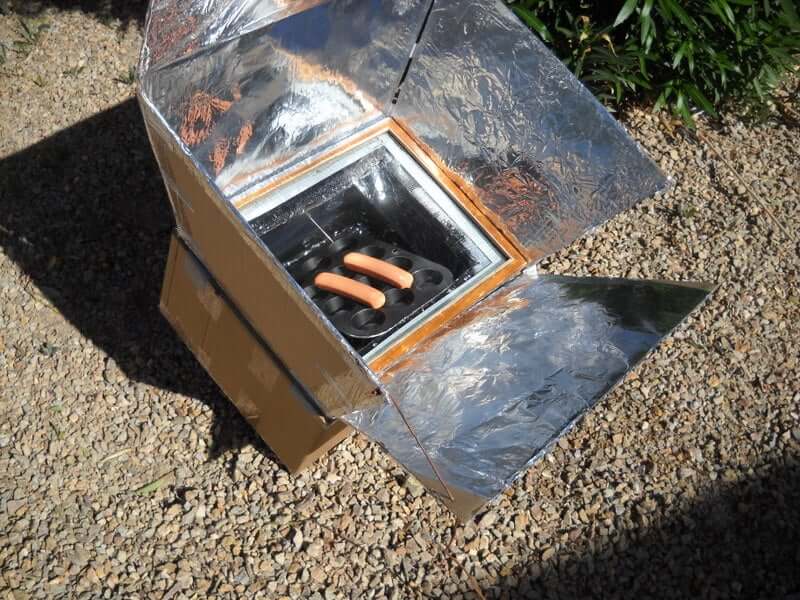 Around the globe, solar cookers or solar ovens are becoming increasingly popular.

Solar ovens are being promoted worldwide by environmental crusaders to cut back people’s dependency on firewood and fossil fuels, assist low-income populations toward saving on conventional fuel costs, control air pollution due to fossil fuel combustion and prevent deforestation (firewood for cooking).

Solar cookers are ideal for outdoor cooking and are commonly used during the summer months. A solar cooker can be an excellent energy-saving addition and can supplement the regular electricity or natural gas cooking.

What is a Solar Cooker?

A solar cooker is a low-cost cooking device or apparatus that harnesses energy from direct sunlight to heat, cook, bake or sterilize solid and liquid foods. Solar ovens are ideal for frying, boiling, baking, grilling and sautéing vegetables, meats, casseroles and breads.

Ideally, lifespan of a solar cooker ranges between 10-15 years. Interestingly, foods prepared in a solar cooker taste great and are also nutritious since all the natural nutrients are well-preserved due to slow cooking.

If you are thinking as to how high or intense the temperature can get to, according to Deborah Mitchell, a Senior Editor at CharityGuide and experienced environmental consultant, solar cookers can be used to treat contagious medical wastes, purify potable water, and preserve dried food-stuffs.

The first panel solar cooker was designed by Roger Bernard in France. This inexpensive cooking device utilizes reflective panels to focus solar rays on a closed cooking pot placed inside the solar box. The panel solar cooker is suitable for areas with tropical climates.

The solar box is made of an aluminized cardboard panel that can reach temperatures up to 250 degrees Fahrenheit. However, these solar cookers are not suitable for baking. The only drawback is that the aluminum foil oxidizes and turns dark within a couple of weeks.

The prototype has remained unchanged since then. These ovens can easily reach up to 400 degrees Fahrenheit. One can use multiple pots simultaneously. These solar cookers can be easily made at home. The box solar cookers take more than 3 hours to cook large quantities of food.

This solar oven has a curved concentrator made of highly reflective element which can produce high heat. Parabolic Cooker is difficult to use as the concentrator has to be adjusted every 10 to 30 minutes, depending on the focal length of the solar rays.

Words of Caution: Users must wear a sunglass while using solar cookers as the high solar radiation can severely damage the eyes.

How does a Solar Cooker work?

There is a common misconception that the sun’s heat trapped inside a solar oven cooks the food. A solar cooker traps the UV light rays and converts them into longer infrared light rays (heat energy) that cook the food.

The infrared light rays are retained by the cooking pot and the food by the means of a lid or covering. Studies have revealed that infrared radiation has the energy to make the fat, water and protein molecules present in food vibrate vigorously and heat up.

A solar cooker is based on three basic principles to function:

Reflecting petals or panels focus the UV light rays to the interior of a solar oven. The surfaces are usually made of alloy comprising chromium, silver and aluminum. The solar energy (both direct and reflected) enters the solar box through the glass or plastic pane.

Single or multiple reflectors can used to bounce additional sunlight and enhance the internal temperatures in a short span of time.

The sun rays are trapped by dark pots placed inside the solar box. This phenomenon is known as the Greenhouse effect. In absence of dark pots, the sunlight can travel back through the glass or plastic top.

The sunlight absorbed by the pots is transformed into longer-wavelength thermal energy. This radiant heat energy cannot pass back out through the glass or plastic top. Hence, it gets trapped within the enclosed space. This heat increases the inner temperature of the solar oven.

This continues until the total heat loss of the solar cooker is equal to the solar heat gain. Thus, temperatures sufficient for pasteurizing drinking water and cooking food are easily achieved.

How to Build a Solar Cooker at Home

The first box type solar cooker was conceptualized and built by Nicholas-de-Saussure, a Swiss naturalist, in the year 1767. He cooked fruits in the device.